A collection of Node-RED nodes that enable sending and receiving SMS from Andino boards. 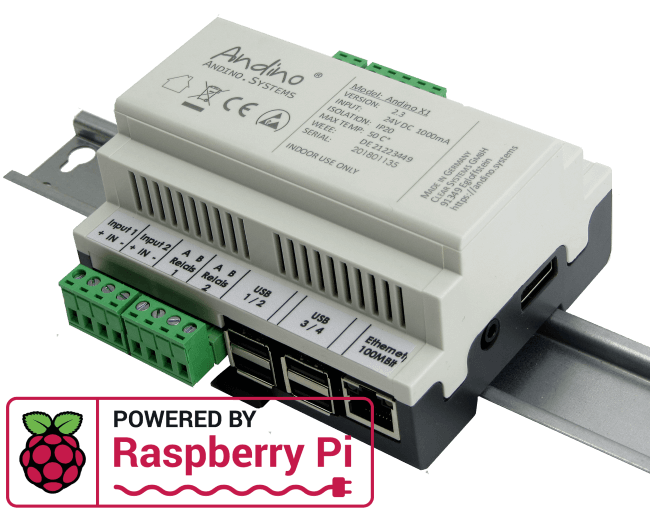 Andino boards, like the Andino X1, Andino X2 and Andino IO enable the usage of the Raspberry Pi in industrial environments by providing a housing, several digital inputs and relay outputs.

For more information, please refer to:

This package contains 4 nodes enabling different aspects of SMS handling using the Raspberry Pi and a 2G/4G modem on the Andino. The following sections explain the functionality of each node. The nodes use at commands to communicate with the modem in conjunction with serial nodes.

This Node, in conjunction with a serial out node, enables sending SMS to a target phone number.

The SMS Checker node sends out a request reading all unread messages to the modem when receiving an input (the content of the input message is irrelevant). It first sets to modem to text mode, then sends a check SMS command.

This node checks all inputs for an indicator message, that a new SMS has arrived (+CMTI:). When receiving a matching message, it relays the message to the next node.

The SMS Listener node can be used in conjunction with the SMS Checker node to automatically check for incoming messages. (see example flows below)

The SMS Processor node takes incoming signals messages from a serial node, checks if the input is part of an SMS message and returns a message with the following variables:

Downloads for all example flows can be found on GitHub!

Using the nodes as described above, we created several example flows for common use cases in SMS processing. These include:

Using the Send SMS node in combination with a Serial out node, this flow can send SMS for testing purposes. The flow is initiated by a inject node, injecting msg.payload and msg.number.

This flow can roughly be split in two parts: At first, the Check for SMS node is triggered by an inject node. It then sends out a check message request through the Serial Out node.

The Process SMS node then checks all incoming messages from the Serial in node for an SMS output message. These are sent to three debug nodes that print msg.timestamp, msg.number and msg.payload to the debug window.

As above, the Process SMS node then checks all incoming messages from the Serial in node for an SMS output message. These are sent to three debug nodes that print msg.timestamp, msg.number and msg.payload to the debug window.

While the flows using function nodes offer most of the functionality of the custom nodes, they cannot be imported into existing projects in NodeRed as easily. Their use is only recommended for testing. See here for a list of all function node flows.